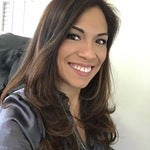 Karen graduated in the top twenty percent of her class in the University of San Martin de Porres in Lima, Perú, where she majored in Law and Political Science. She later came to Boston University where she obtained her Masters of Laws degree.

As a law student, Karen led a political group which helped raise awareness among young people about human rights, promoting an active participation of young adults in politics back in Peru. Her particular love of arts led her to immerse herself in Peruvian folklore dancing and sculpting and painting.  As a part of the Second Special Criminal Court of Lima, one of the six Anti corruption Courts, Karen gained valuable exposure to the judicial process that led to the prosecution of crimes like embezzlement, gun-running, money laundering, corruption and bribery.  She built strong organizational and public speaking skills, and strengthened her conflict resolution methods working with groups of people of diverse needs and backgrounds. During her Master's degree, Karen dedicated herself to the study of ethics in the practice of international business, focusing on the corrupt conduct of foreign public officials, bribery, facilitation payments and the value of compliance programs.

Karen is bilingual and during her experience in education she advocated for Heritage Spanish speakers and the establishment of new standards of education more aligned with the particular needs of our Latinx population. Karen took a particular interest in promoting bilingualism and the value of an education that reflects and respects our diverse cultures. During her free time, Karen enjoys being part of a Latin American dancing community, chocolate sculpting and playing the cello.

Karen came back to the legal profession and now is part of our team. She is an invaluable asset to our firm. Our clients love her upbeat personality and commitment to each case. As an attorney from Peru, Karen's professional prospects involve being an attorney in Massachusetts and continuing the high standards that Erkan & Associates sets forth: being the best criminal defense in New England.