In response to widespread abuse in the motor vehicle citation process, the Massachusetts legislature enacted the so-called "no-fix" law, Mass. General Laws c. 90C, §2.  This piece of legislation was "designed to prevent the manipulation and misuse of traffic citations, and to provide prompt and definite notice of the nature of the alleged offense to the putative violator." Commonwealth v. Babb, 389 Mass. 275, 283 (1983). 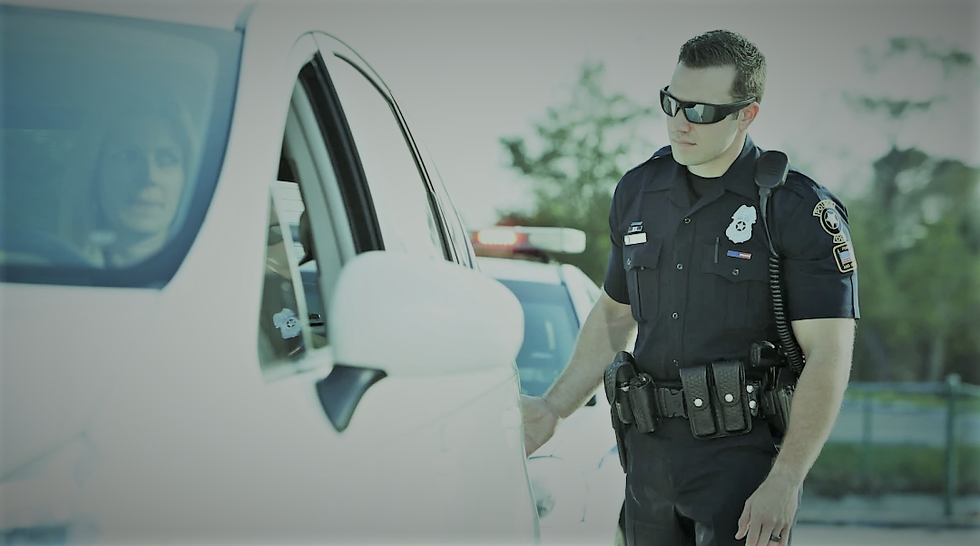 The law became necessary to stop the corrupt police practice of fixing tickets as personal favors on the one hand, and post-hoc decisions to ticket someone for retaliatory or other illegitimate purposes.

The no-fix statute is also designed to make sure that traffic offenders receive clear notice that they will face charges, so that they can secure evidence related to the event in a timely manner, before that opportunity is lost by the passage of time.

The no-fix law requires that police "shall ... record the occurrence of automobile law violations upon a citation ... as soon as possible[,  ] and give a copy of the citation to the violator[.]" Police are required to record these violations in a sequentially numbered citation book, with carbon copies of the citation furnished to the violator, the police chief, and the court.  Finally, police must account for any damaged or missing citations in their citation books. G.L. 90, §2.

If police do not play by these rules, the consequences can be strict.  With certain exceptions, "[a] failure to give a copy of the citation to the violator at the time and place of the violation shall constitute a defense in any court proceeding for such violation[.]" G.L. 90, §2.

The application of the no-fix law provides a powerful, yet often-overlooked defense to motor vehicle charges.  Whenever a client is charged with a driving offense, one of the first things we will look for is evidence of compliance with this law, or lack thereof.  If police have failed to strictly follow the statutory procedure, we will pursue dismissal on behalf of our clients.

Virtually every criminal motor vehicle offense - including those which you may not think of as moving violations - are covered by this protective measure.  Common charges include DWI/DUI/OUI (drunk driving), operating to endanger, driving on a suspended license, leaving the scene of an accident involving property damage, injury or death, license fraud, insurance violations, use of a motor vehicle without authority, attaching plates, drag racing, abandoning a car, habitual traffic offenses, interlock violations, and refusal to submit to a police officer.

Motor vehicle homicide is not covered by this statute.

Exceptions to the no-fix law.

If a ticket is not furnished at the time and place of the offense, the government may argue that one of the following exceptions apply:

When we file a motion to dismiss for violation of the no-fix law, get ready to see police and prosecutors scramble to find a way to fit your case into one of these exceptions.  In most instances, their efforts are doomed to fail.  That is because we will have fully investigated the facts and circumstances of your case, and presented the issue to the Court in a persuasive memorandum which details all the reasons why the government must face consequences for not following its own laws.  The Court will review our memorandum in advance of the hearing, before listening to the prosecutor's excuses.  From that position, the Court will likely view the prosecutor's response for what it is - an excuse contrived after the fact to gloss over the officer's mistake.

The fact of the matter is, most of the government's excuses for non-compliance do not withstand serious scrutiny.  An officer may claim the violator "could not have been stopped," only for our investigation to reveal that the officer made no real effort to track down the driver.  He may, for instance, have the driver's license plate number, but make no effort to actually talk to the operator by, for example, checking the address of, or simply calling, the registered owner.  Failure to pursue reasonable investigative measures cannot excuse the application of this law.

One of the favorite excuses for the prosecutor is to say they needed more time to investigate the incident.  However, in most cases, we are able to show that any further "investigation" went to aspects of the case wholly irrelevant to the core questions of whether a crime actually occurred and who committed it.  We will also carefully scrutinize the timeline to reveal that the investigation was not pursued promptly.  Police must actively pursue their investigation in order to benefit from this exception.  The reality is that, more often than not, an investigation drags on not because it takes time to conduct it, but because prompt resolution is generally not a top priority for many officers.

The final excuse is the catchall "not inconsistent" with the purpose of the statute exception.  There are certain circumstances which the courts have found to fit this exception.  One such circumstance occurs when the offense is so serious that it would be "inconceivable" that a motorist would be unaware of potential criminal charges, such as in a case where a motorist struck a pedestrian in a crosswalk, "catapult[ing]" him 40 feet in the air.  Another exception occurs where a person is placed under arrest for a motor vehicle crime at the time it is committed.  The courts have reasoned that the formal nature of an arrest eliminates the possibility of a "fix," and notice to the accused exists in the fact of the arrest itself.   However, if the arrest does not substantially conform to the charges that are ultimately filed, a violation of the no-fix law has, in our view, still occurred.

Whatever excuse the government will offer, we will not take them at their word.  Rather, we will examine your case for compliance with the statute and, in the event of any governmental error, demand dismissal of your case with prejudice.

What to do when you get a traffic ticket.

If you have received a driving citation, immediately review the back of the citation, noting that there are different 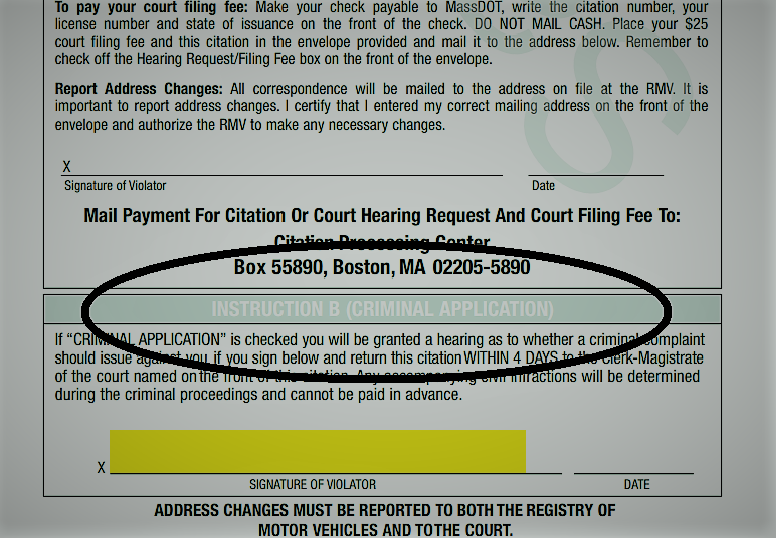 If charged with a criminal offense, you must complete SECTION B on the back of the citation and return the completed citation to the clerk's office at the court listed on the front of the ticket within four days.  Many people will foul up the citation form, sending the ticket to MassDOT instead of the clerk, thereby forfeiting their right to the highly advantageous clerk's hearing.

If you receive a ticket for a criminal driving offense, I urge you to contact us immediately.  Any delay may result in your loss of a key opportunity to win your case -- before it has ever begun.