Frequently, the initial stages of court proceedings are where cases are won and lost.  This is nowhere more true than in cases involving violent crime.  In many such cases, the government will, at arraignment, file a motion pursuant to G.L. c. 276, §58A, requesting that the accused be locked up prior to trial based on the allegation that the accused is a danger to a particular person or the community in general.  The proceeding which follows is called a "dangerousness" hearing.

The "dangerousness" hearing is a devastating weapon that the government wields in an alarming number of cases, often inappropriately.  The stakes at such a hearing couldn't be higher; the outcome will determine whether the accused can fight his case as a free man, consistent with the presumption of innocence, or whether he will be stripped of his freedom before a jury has ever heard any facts.  Here is a quick overview of the mechanics:

The hearing is triggered when the government files a one page, boilerplate form with the court.  Once the form is filed, and provided the police report contains information minimally supporting the charge, the Court is required by law to take the accused into custody.  The government has an absolute right to then request a continuance of three days for a hearing on its motion, while the accused remains in custody.  This is one of the more disturbing aspects of this law - the judge has no choice but to agree to hold the accused prisoner during that three day continuance period.  And the government will almost always request that delay.  The accused also has the right to request a delay, up to seven days, in order to prepare for the hearing, which many lawyers will request - often needlessly or unjustifiably.  Whatever the length of the delay, the accused remains in jail for the duration.

The next stage of the hearing requires the government to establish by "clear and convincing evidence" that the accused constitutes a danger.  If the Court makes that finding, the accused is ordered detained, without any right to bail.

A note on murder charges: Like most states, the law in Massachusetts creates a presumption that individuals charged with capital crimes such as murder will be held without bail until trial.  No dangerousness hearing is required and, in the vast majority of cases, murder defendants will have to fight their cases from a jail cell.

Technically, the statute requires that the trial should occur within 120 days (four months).  The reality is, however, that once detention is ordered, the Court will grant almost any request to extend the deadline.  Believe me when I say, I have seen that four months turn into four years.  Do not allow that technical 120 day deadline deceive you - if the court orders detention, in most instances, the accused will remain locked up until trial.

The manner in which the hearing is conducted is no less disturbing.  You may expect that a deprivation of liberty of this magnitude would be preceded by the protections you associate with a trial -- testimony of live witnesses, adherence to the rules of evidence.  But those critical protections are nowhere to be found in this law. 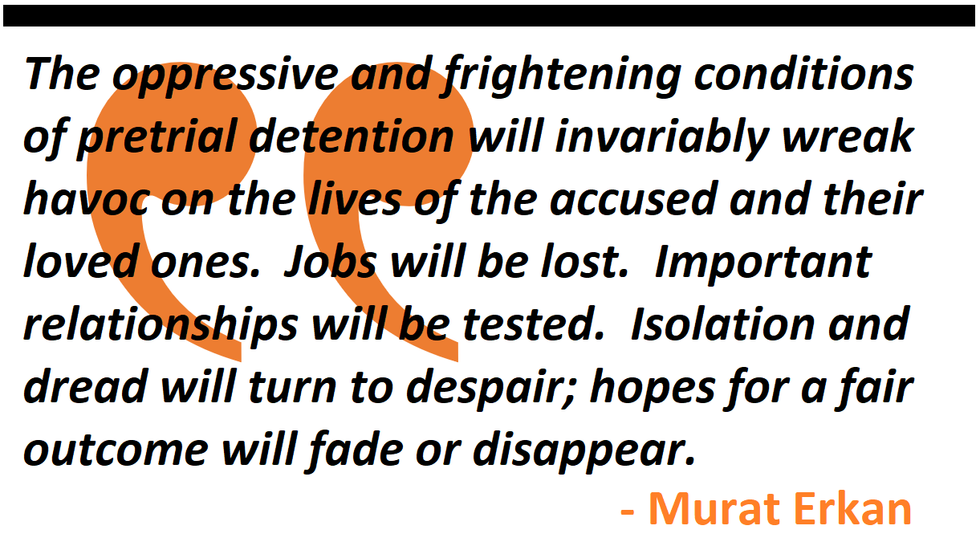 The rules of evidence do not apply in any way at these hearings.  What this means is, the government can detain the accused without presenting any witness testimony at all.  Most commonly, the dangerousness determination is made just by submitting the one-sided police report to the judge.  Very often, there is no opportunity for the lawyer to cross-examine the accusers at all.  The judge will simply accept the story as true, with little to no scrutiny or critical evaluation.

Given the lack of any meaningful procedural protections, it is no surprise that judges will, more often than not, agree with the prosecutor and order the accused detained.  The accused may have no prior record of any kind.  The accused may be innocent of the charged offense.  Neither of these considerations will constitute a true obstacle to a judge's decision to detain.

At the end of the day, judges, like all human beings, act based on their own self-interest.  Though there are some judges that truly bring to their courtroom the wisdom and courage to make fair decisions, many judges are simply afraid to disagree with the prosecutor.  The reason is obvious -- the judge worries that if he orders release, and the accused hurts somebody, they will be blamed for being too soft.  After all, no judge ever got in trouble for being tough on crime.

The consequences of an adverse ruling at the detention hearing can be devastating.  The oppressive and frightening conditions of pretrial detention will invariably wreak havoc on the lives of the accused and their loved ones.  Jobs will be lost.  Important relationships will be tested.  Isolation and dread will turn to despair; hopes for a fair outcome will fade or disappear.

The circumstances of pretrial incarceration are also destructive of an accused's ability to defend themselves.  Overwhelming stress make clear thinking difficult.  Practical limitations on communication, contact and movement make review of the evidence and calm strategizing all but impossible.

The prosecution's power in securing pretrial incarceration by invoking the "dangerousness" procedure is truly frightening.  However, having handled hundreds of these hearings, I know how to shift the balance in your favor.  Whether by calling into question the merits of the government's case, or by helping the judge understand that there are less restrictive means short of incarceration to address the prosecutor's concerns.

Less skilled, less experienced, less aggressive attorneys will advance weak, cookie cutter strategies with no real prospect of success.  But the appropriate response to a dangerousness motion is subject to infinite variations.  Only a true legal tactician will possess the skill and raw instinct necessary to identify the paths to victory.  There is simply no room for errors; the slightest misstep will virtually guarantee the battle is lost.

For that reason, the prosecution may use the dangerousness hearing as a way of preserving its best case against the accused, before the defense has a real opportunity to put that case to the test.  For example, in a case of domestic assault, where the alleged victim may reconcile with the accused over time, the prosecutor may force the victim to testify so that her testimony will be preserved.  That way, the government can present the accuser's prior testimony as evidence at trial, even if the accuser no longer supports the allegations.  The prosecutor, who earlier advocated for the alleged victim, will use the prior testimony to secure a conviction.  The accuser's wishes, once their testimony has been locked in, will become irrelevant.  Stated simply, what is said at the hearing can not be taken back.  This variety of dangerousness hearing is fraught with risk.  Only the most skilled attorney will understand how to advocate for the client's release without dooming their chances of acquittal at trial.

Steel can only be hardened through the fires of the forge.  We have waged these wars on countless occasions, and have the battle-scars to prove it.  We have been able to secure pretrial release in the overwhelming majority of our cases.

Because your case will often be won or lost at the detention hearing phase, I highly recommend that you contact our office right away if you are charged with a violent crime.

Click here to see our in-depth commentary on defending violent crimes, including domestic violence and murder.