Only the largest, most serious, police investigations end up in federal court.  For example, after occupying a top spot on the FBI's "most wanted" list for over a decade, James "Whitey" Bulger faced 32 counts of racketeering and 19 counts of murder in the United States District Court for the District of Massachusetts.

When facing drug related charges in federal court, the accused is often overwhelmed by the weight of the government's

power.  With nearly unlimited resources, drug investigations often involve a battery of local, state, and federal police agents, hours of wiretap recordings, ponderous search warrant applications, and thousands of pages of reports and other case related materials.  For months, and sometimes years, investigators will cast a wide net, gathering evidence against each and every participant in a "DTO," or "drug trafficking organization" – from the importers bringing bulk amounts of drugs into the Commonwealth, down to the most insignificant couriers and users.  When authorities finally spring their trap and makes arrests, they usually arrest all suspects in a single, dramatic takedown, the aftermath of which is evidenced by transport vans overloaded with prisoners hauled to detention facilities.  With troves of evidence, most defendants stand little chance in federal court, where prosecutors and law enforcement are most aggressive.  More importantly, by stockpiling evidence against their targets, federal prosecutors can engineer charges to trigger harsh minimum mandatory sentences, which frequently exceed 10 years.

In fact, the official policy of the Attorney General of the United States has never been harsher on federal drug defendants.  In a marked departure from the policy of the previous administration, which sought to reserve severe mandatory minimum sentences for only high-level or violent drug traffickers, the policy of the current administration is to craft charges to carry the most serious available sentences against virtually all offenders big and small.  Many of these charges carry minimum mandatory sentences, which severely limit a judge's discretion to tailor a fair sentence.

The impact of the Department of Justice's current sentencing policies is best understood by reference to the actual mechanics of federal court.  Resort to familiar constitutional principles including the presumption of innocence may cause most people to expect that the outcome of a federal court case is decided by a jury at trial.  But current data reveals that the presumption of innocence has almost no actual relevance in federal court, in which virtually every person charged with a crime is ultimately convicted.  By way of illustration, in 2015 only 1 case out of 457 resulted in an acquittal in the District of Massachusetts.  The remaining 456 defendants were each found guilty as charged.  See Hans Sherrer, 99.8% Conviction Rate In U.S. Federal Courts Can Make Japanese Prosecutors Jealous (May 17, 2016).  Given this staggering conviction rate, it is no surprise that an estimated 95% of all prosecuted felony cases in federal court end up in a guilty plea. See Hon. Jed S. Rackoff, Why Innocent People Plead Guilty (November 20, 2014).  Another factor contributing to

these disturbing statistics is the ever present threat of minimum mandatory sentencing and other instruments of the federal sentencing guidelines, which allow prosecutors to extract guilty pleas from virtually all defendants. Id. See also Sidebar 2.  This all means that the right to trial by jury and the tradition of judicial discretion in sentencing have been essentially erased from federal courthouses.  Instead, prosecutors now possess almost limitless power in the charging and sentencing of every federal defendant.

Stated simply, facing a federal indictment is a daunting experience.  The penalties are so severe, and the conviction rate so high, your situation may feel hopeless.  To make matters worse, finding an attorney equal to the task of standing up to the Federal government presents another level of adversity to a federal defendant, for a number of reasons.

First, federal law does not provide constitutional protections nearly as expansively as Massachusetts state law.  With looser rules for confidential informants, secret wiretaps, and car stops, police have even greater freedom to intrude into a person's private spaces.  As a result, their conduct is less susceptible to court challenges.  Nevertheless, police still must operate within the law.  They cannot stop and question you, they cannot search your car and house, and they cannot tap your phone just because they think you might be involved in criminal conduct. 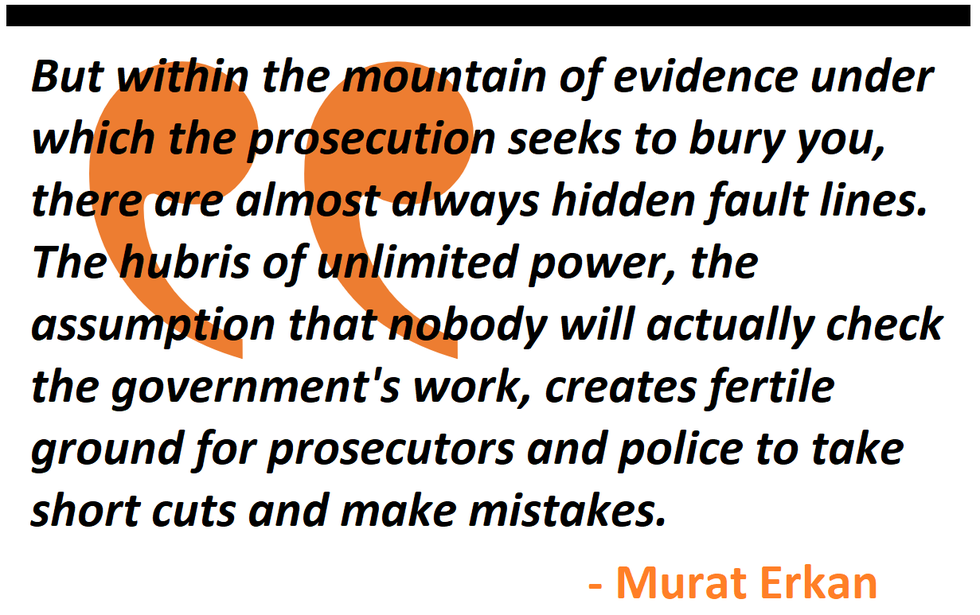 Second, federal prosecutors are famous for dumping an enormous amount of documents at the accused, in a bid to overwhelm their lawyers.  It is a rare federal case which does not commence with the disclosure of numerous CD-roms and zip drives loaded with thousands -- sometimes tens of thousands of pages of evidence.  The prosecutor knows that the sheer volume of evidence he or she will throw your way will quickly overwhelm all but the most indefatigable lawyer.  This is a tried and tested government tactic to get your lawyer to the bargaining table right away, rather than conducting a comprehensive review of the government's case.

The more unforgiving federal standard for constitutional protections when combined with the daunting task of mastering a library of discovery means that few lawyers are prepared to raise any credible defense to the government's case.  Most times, before your defense is started, you have already lost.

But within the mountain of evidence under which the prosecution seeks to bury you, there are almost always hidden fault lines.  The hubris of unlimited power, the assumption that nobody will actually check the government's work, creates fertile ground for prosecutors and police to take short cuts and make mistakes.  Only the most tireless advocate will dig deep enough to uncover the underlying assumptions and errors in the government's case.  Only the most skilled lawyers will know how to exploit them.

At Erkan & Associates, LLC we know there is simply no substitute for hard work.  We will not be intimidated by the government's heavy handed tactics.  Instead, we will mobilize our team to scrutinize every page of information relevant to your case. We will question every circumstance which the government claims establishes your guilt.  Flowing from our unwavering commitment to our country's constitutional guarantees, we will draw upon the grit and resolve that it takes to shake the foundation of the government's case.  See Sidebar 3, Sidebar 4.