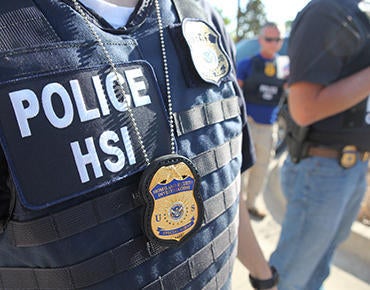 Wrongfully convicted?  It may not be too late.  What do you do if you are an innocent person convicted of a crime?  Where do you turn when you realize that your prior attorney did not act in your best interest? Can anything be done if you learn that your criminal case from years ago carries an unforeseen but devastating consequence like deportation? How can you tell if any of the recent government scandals like the drug lab scandal has affected your case? The attorneys at Erkan & Associates, LLC can help you navigate these frequently confusing waters, and vindicate your rights with a motion for post-conviction relief in the trial court.

For non-citizens, a surprising array of charges carry the additional consequence of deportation.  If you are a non-citizen who has been arrested, many dispositions of your case can result in deportation, exclusion from admission to the United States, and denial of naturalization.  If those consequences are triggered, adverse immigration action is practically inevitable, and the law provides no avenue for relief.

For many non-citizens, these immigration consequences are far more important than any jail sentence or term of probation.  If you haven't been back to your country of birth in years, if you grew up as an American in the United States despite your lack of citizenship, if your spouse and children live here, immigration concerns are likely paramount.

An example of a motion for new trial can be found here. In this motion, which the Commonwealth ultimately conceded, we argued 1) that our client's guilty plea was invalid because an abusive boyfriend coerced her into pleading guilty to conceal his own wrongdoing, 2) her prior attorney failed to adequately represent her, and 3) her case was tainted by egregious governmental misconduct.

To read the Supreme Judicial Court's view of the state prosecutors' response to the Dookhan scandal, click here.  Finally, in response to this directive, the District Attorneys Office took appropriate action by dismissing thousands of cases.

To read the fallout of Farak's scandal, click here.

In 2012, Attorney Erkan discovered that the Methuen Police Department was utilizing a form which profoundly misled Hispanic arrestees in drunk driving cases.  Years after exposing this wrongdoing, Attorney Erkan discovered that the Methuen Police knowingly continued to proliferate their misleading form, despite its knowledge that the form illegally coerced arrestees into incriminating themselves.  Attorney Erkan's discoveries prompted a class action federal lawsuit which is currently pending in the United States District Court. See the Eagle Tribune and Boston Globe coverage of this story here.  Read the federal lawsuit here.

If you would like to read our motion for new trial, which exposed Methuen's practices, click here.

Thus, an attorney has an absolute duty to inform a client of the immigration consequences of his or her case, and actively seek to avoid those tragic consequences.  Unfortunately, attorneys often fail to do so.  The result is, many defendants follow their attorneys' advice, accepting what sounds like a good deal to resolve their case – maybe probation on a first offense, for example – and unwittingly volunteer themselves for disastrous immigration consequences.

Similarly, a judge accepting your guilty plea has a duty, imposed by state law, to properly warn all defendants of the potential for immigration consequences.  If the judge failed to do so, state law provides that the court must vacate your conviction. 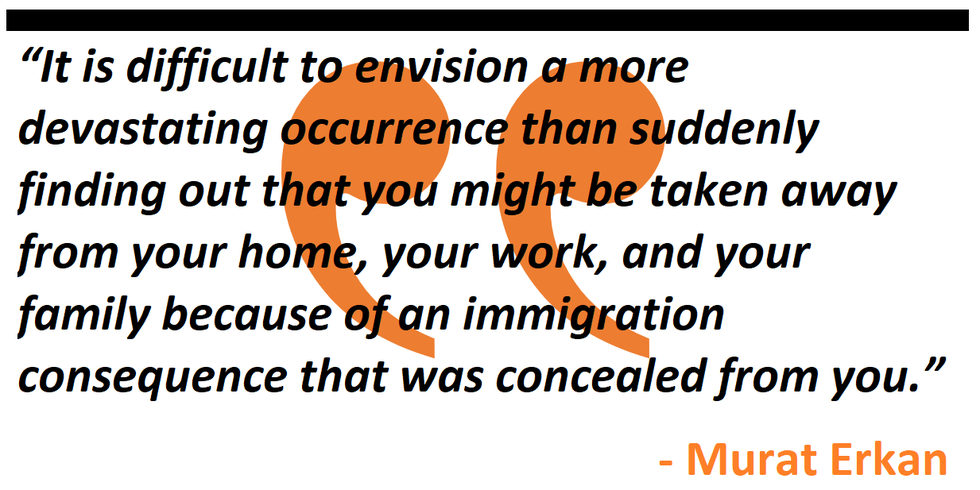 If your lawyer failed to tell you about the immigration consequences of your case before you pleaded guilty, or if the judge failed to warn you of the possible immigration consequences of your guilty plea, the consequences can be tragic.  It is difficult to envision a more devastating occurrence than suddenly finding out that you might be taken away from your home, your work, and your family because of an immigration consequence that was concealed from you. The attorneys at Erkan & Associates, LLC can help.  While many lawyers may dabble in post-conviction motions, our office has developed a system of tackling these cases which rises to the level of an art form.  Our office is a recognized leader in terms of vacating prior convictions, boasting an unprecedented success rate of over 95%.

Our success flows from a number of factors.  Our comprehensive understanding of the criminal immigration laws and various precedents at the state and federal level, our passion for helping keep families together, and our unique, tailored, approach to each individual client's particular story allow us to present compelling cases which lead to astonishing results.

When police arrest a person for a drug offense, they send the suspected drugs to the crime lab.  There, chemists test and weigh the drugs, determining the weight and chemical composition of the substance.  Only then can the court be sure that the substance a defendant possessed was, in fact, illegal narcotics.  These labs have strict protocols in place to maintain the integrity of the criminal justice system.  At least, that's how it's supposed to work.

From 2004 until 2012, Annie Dookhan worked at the Hinton State Laboratory Institute in Jamaica Plain.  During that time, she intentionally breached the procedures the lab had in place.  She falsified equipment maintenance records, she forged her co-workers signatures on documents, claimed that samples tested positive as drugs when she never actually tested them, and when samples would test negative for illegal narcotics, she would add narcotics to them, ensuring the defendant's conviction.  She did this purposefully in a misguided endeavor to fight as a loyal soldier in the government's ill-fated but persistent war on drugs.

Supervisors at the drug lab turned a blind eye to warning signs of Dookhan's misconduct for years.  After her supervisors eventually relieved her from her drug testing duties, they permitted her to continue testifying against defendants in court.  The laboratory and important government officials actively covered up the scandal.  After the scandal became public, the Commonwealth attempted to minimize the number of affected cases, then devoted vast resources to resisting the outcry for dismissal of all cases with which Dookhan was involved.

After Dookhan's misconduct became public in 2014, the public expected stricter management and tighter control of the Commonwealth's drug labs.  However, scandal hit yet again in 2016, when drug lab chemist Sonja Farak admitted that since 2004, she had been consistently under the influence of drugs while discharging her testing duties.

Even more shocking, Farak didn't get her supply from the street, but instead, from the samples police would submit to the lab and the "standards" the lab kept for comparison.  On top of using methamphetamine and manufacturing her own crack from the lab's cocaine WHILE AT WORK, she falsified the lab's records in order to hide her misconduct.  Consequently, the Commonwealth ordered thousands of cases potentially tainted by Farak's misdeeds dismissed.

What these scandals reveal is that the Government should never be assumed to be beyond reproach.  Consider the fact that after the Dookhan incident shattered the public trust in the drug lab, the government turned to the same playbook of minimization and obfuscation when the Farak allegations surfaced.  And one would expect that the Dookhan and Farak scandals would have served as a powerful deterrent to government cover-ups.  But consider the current headlines with respect to the office of alcohol testing.  In the wake of recent questions as to the accuracy of Massachusetts breathalyzer testing devices, the head of the office of alcohol testing was recently fired for knowingly hiding evidence which undermined the validity of breath tests in potentially thousands of cases.  Read the September 1, 2017 article here.  This cluster of incidents reveals the Government's tendency toward wrongdoing.  More disturbingly, these cases reveal the Government's almost instinctual reflex to conspire to cover up its misdeeds.

If you suspect your case may be affected by some level of governmental misconduct, please contact us.  We will shine a light on any Governmental misdeeds which may have infected your case.  We will hold those bad actors accountable and pursue the justice you deserve.  For an example of our pioneering efforts in this regard, see Sidebar 3.

Conviction overturned due to ineffective assistance of prior lawyer, case dismissed

Prior lawyer fails to warn client of immigration consequences of plea; plea overturned