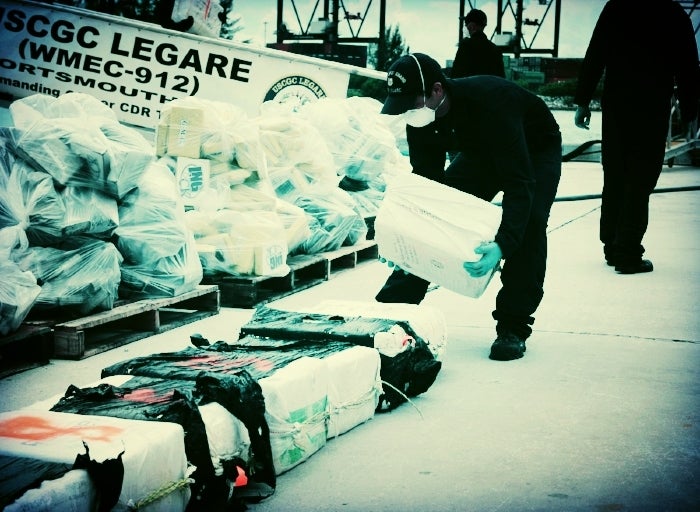 When we say Mass law is severe, this is no exaggeration. Even federal court provides a mechanism to dispense with minimum mandatory prison sentences for many first time offenders.  Massachusetts has no such safety net.  If you lose your case, not even the judge can avoid the application of severe mandatory sentences in drug cases.

Even if you have no record at all, the Government will seek stiff penalties, most often including incarceration, for your drug offense.  Consequently, when charged with a drug offense, you need a specialized team of attorneys on your side. 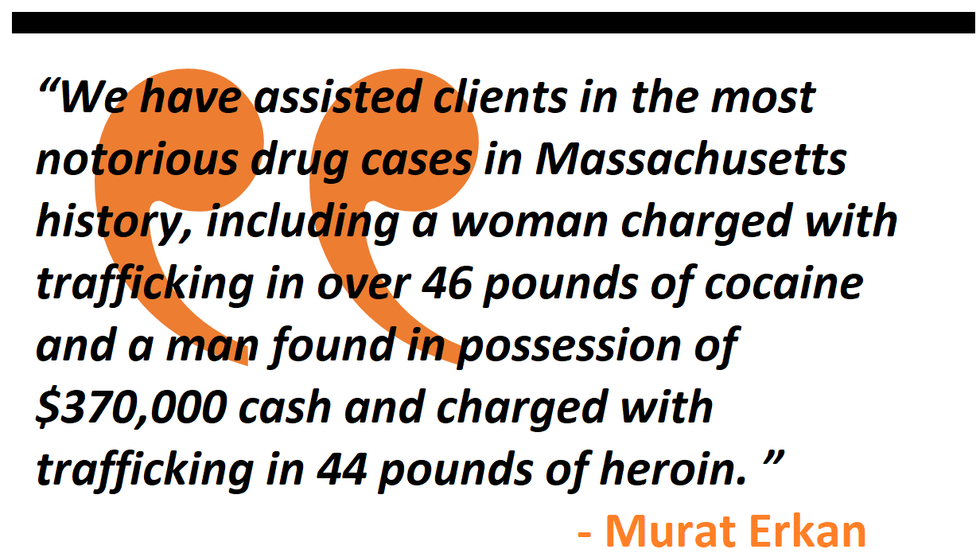 Today, the need for an aggressive defense in drug cases is greater than ever.  In the past several years, a dramatic upsurge in opiate addiction and overdose has captured the nation's attention.  As drug overdose has risen to the leading cause of death among persons under 50 years old, the public fear and outcry has become deafening.  The nation is afraid and looking for someone to blame.  This places enormous pressure on prosecutors and judges to “make an example” of alleged drug offenders (even if stiff jail sentences do nothing to solve the problem, disproportionately affect minorities, and may actually make the problem worse) See Sidebar 1.

Without a powerful defense, you may quickly find yourself another casualty of an ill-conceived war on drugs.

Erkan & Associates, LLC has developed a reputation as a leader in bold, cutting edge drug defenses, allowing us to deliver consistently outstanding results on behalf of our clients.  We have assisted clients in the most notorious drug

cases in Massachusetts history, including a woman charged with trafficking in over 46 pounds of cocaine and a man found in possession of $370,000 cash and charged with trafficking in 44 pounds of heroin.  Not only can we help most of our clients avoid jail time for these charges, we have an astonishing record of getting cases of this type dismissed.

Drug defense is a highly complex sub-specialty of criminal law.

Without dedicating countless hours to study and courtroom practice, even the most well meaning attorney can fail to uncover a critical issue in any given drug defense.  From issues of search and seizure, trends and patterns of distribution, expert opinions and evolving legal precedent, a truly effective defense of a drug case rises to the level of an art form.

At Erkan & Associates, LLC we have handled thousands of drug cases, of varying seriousness and complexity.  We have saved juveniles from expulsion for possession of Adderall at school.  We have dismantled the government's case against persons claimed to be multi-national, cartel level traffickers.  From this experience, we have developed an encyclopedic knowledge of the constellation of issues which may arise in any given drug case.  As a result, you can be sure that we will exploit every single miscalculation in the Government's case against you.

Some of the issues we may pursue in your case follow.

Police cannot stop, question and search people just because they think they may be involved with drugs.  Instead, there is a complex set of rules which police must follow in conducting drug investigations.  As part of its proud legacy as a pioneer of constitutional protections, the Massachusetts court has developed a vast body of law on the subject of search and seizure.  We will examine your case to determine if police failed to comply with this complex set of legal standards.  We will catch every mistake they make, and use those mistakes to demand dismissal of the charges against you.  At our firm, we consider it our duty to champion the rights of our clients against all oppressive invasions of privacy, unfair and heavy handed investigative tactics.  For an example, read our amicus curiae “friend of the court” brief which we filed with the Massachusetts Supreme Judicial Court, in an effort to put an end to a particularly unfair police tactic of sacrificing the constitutional rights of the little guy in order to make a case against persons that police perceive to be the “big fish.” See Sidebar 2.

Challenging your connection to the contraband.

Very often, police make assumptions about you based on suspicions, where they find you, or the company you keep.  But the law does not allow for conviction based on guesswork, guilt by association, or presence near contraband.  Instead, the Government must construct a compelling case against you, which establishes your guilt beyond a reasonable doubt, in order to obtain a conviction.  When you retain our firm, we will work to topple even the sturdiest seeming case against you.  By drawing upon our decades of experience, we will call into question each of the Government's assumptions, revealing the flawed reasoning, conjecture and speculation that often forms the foundation for modern drug cases.  By revealing the gaps in the Government's proof, we will counter its case and generate the critical “reasonable doubt” which inspires acquittals.  See Sidebar 6.

Particularly in circumstantial cases, the Government will attempt to patch up the holes in its case by calling upon a so-

called “expert” narcotics detective to vouch for its own theories.  This is a particularly dangerous variety of testimony for a number of reasons.

If you watch enough of these so-called experts testify, you will see how the made-to-order nature of their testimony approaches absurdity. For example, in one trial an “expert” may testify that drug dealers never get into the alleged buyer's car.  In another trial the very same “expert” may testify that the deal ONLY goes down in the buyer's car.  Wildly varying opinions, tailored only to making you look guilty.

As a former prosecutor, Attorney Erkan worked at ground zero in the so-called “war on drugs.”  He coordinated prosecutions targeting high impact offenders.  He had boots on the ground during search warrant executions.  He interviewed countless users and dealers as he put case after case together.  With that experience, Attorney Erkan has a unique insight into the patterns and techniques of drug dealers.

Building on that foundation, our team is able to anticipate and attack the foundation of the ever-changing opinions of so-called police “experts.”  By challenging the assumptions, by revealing the unverified, changing nature of their opinions, by underscoring the bias these so-called “experts” bring to the courtroom, we will expose their testimony for what it really is: a flimsy effort to substitute police credentials for facts.  We will help the jury put this testimony in its proper place, and instead help them to focus on whether the Government has satisfied its burden of proof beyond a reasonable doubt based on facts, not shifting theories.

Another recurring issue is that of confidential police informants.  This is another dangerous artifact of drug enforcement that carries with it a tremendous potential for abuse.  That is, police will launch investigations, and prosecutors will build cases, based only on the word of an informant whose identity will never be known, and whose testimony will never be heard in court.

It is not unheard of in the annals of our law for police to abuse this technique, sometimes by misrepresenting the informant's information, hiding his dark past, or fabricating the existence of a tip altogether. See, for example, Commonwealth v. Ramirez, 416 Mass. 41 (1993).  My office is aware of, and will be vigilant against such abusive tactics.

At Erkan & Associates, LLC we believe that the Government should never be allowed to operate in darkness, and that all evidence should be considered and tested in the crucible of cross-examination, in a court of law.  It is a dark and treacherous world indeed when we permit the Government to ask that we trust its assertions of guilt, when it works to conceal the source of its assertions from us. As James Madison said, “there are more instances of the abridgment of freedom of the people by gradual and silent encroachments by those in power than by violent and sudden usurpations.” James Madison, Speech in the Virginia Convention (June 16, 1788).

In most cases, an individual does not become a police informant out of a sense of civic duty.  Instead, the informant is typically an experienced criminal who has himself run afoul of the law.  This type of informant is often caught in flagrante as to his own wrongdoing, and thus has a tremendous incentive to cast the blame on someone else.  Alternatively, an informant may make a living by providing information to police; thus their tip may have less to do with the truth and more to do with greed and financial gain.  Whatever the motivation of the informant, the government will attempt to cover it in darkness.  Our firm, however, will exert tremendous pressure to bring to light all of the facts and circumstances surrounding an informant's animus.  Once exposed, the blemishes and misdeeds which inspired the informant to pin the blame on someone else will be fully revealed.

Evidence excluded as a result of prosecutorial non-disclosure

All charges against wanted fugitive dismissed

Evidence suppressed as a result of illegal search

Conviction overturned due to ineffective assistance of prior lawyer, case dismissed

Client accused of drug dealing has conviction filed with no sentence

Allegation of probation violation not sustained

Drug conviction filed with no sentence or jail time

Negotiation results in dismissal of all charges in heroin trafficking case

Heroin distribution charges continued without a finding then dismissed

Prior lawyer fails to warn client of immigration consequences of plea; plea overturned